Eraser has been a blessing since time immemorial. Remember, making mistakes and having the option to rectify them with the help of these little angels? Wish we could do the same with the mistakes we make in our lives. Since that is not possible, we should be happy that at least we can correct the errors we make on paper.

The erasers always used to be a prized possession for kids.  The transformation of the pink and white coloured eraser to colourful ones with different shapes and sizes made them popular and a must-have among the school going kids. To, tell you a secret, I am still fascinated by them.

Sure, almost all of us are aware of the utility of these white/pink little things. But, did any of us ever try to find out how and why do these erase the pencil marks on the paper? Well. It is never too late to satiate the curious mind and gain some knowledge.

An Eraser is a thing that is used to remove the marks left by pencils and some types of pens. Modern erasers come in all colors and may be made of rubber, vinyl, plastic, gum, or similar materials. 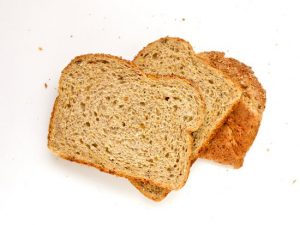 Before the invention of the eraser, moist bread was used for erasing mistakes. Bits of rough stone like sandstone or pumice were also used for the same.  The eraser is said to be invented by an English engineer Edward Naime in 1770. It is said that he used a piece of rubber (the substance) accidently, instead of the piece of bread and discovered its properties. Until then eraser was known as “gum elastic”.

The invention of the process of vulcanization of rubber by Charles Goodyear's in 1839 transformed the eraser. This process made rubber more durable and led to its widespread use.

In 1858, Hymen Lipman received a patent for attaching erasers to the ends of pencils, though the patent was later invalidated since it combined two products rather than inventing a new one. 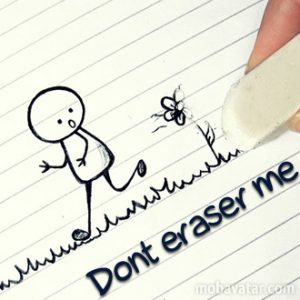 Eraser was made of the rubber latex obtained from the rubber tree. The modern day erasers are composed of petroleum-based synthetic rubber compounds, mostly polyvinyl chloride.

Usually, some sulphur is added to make it to last longer. Vegetable oil is also added to it. The oil makes the eraser softer. Finally, abrasives, like pumice or quartzite, are added, along with dye to give the eraser a particular color. 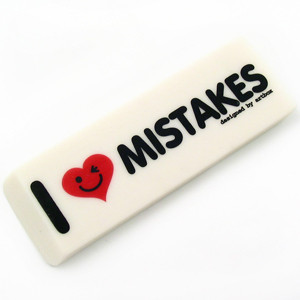 Soft vinyl erasers are softer than the erasers attached to pencils.

Art gum erasers are softer and are used to remove large areas of pencil marks without damaging paper. These erasers leave a lot of residues behind.

Kneaded erasers are like putty. These erase without wearing away the paper. Kneaded erasers may stick to the paper if they are too warm. They eventually pick up enough graphite or charcoal that they leave marks rather than pick them up, and need to be replaced.

The pencil is made of the mineral graphite. When you write, the graphite particles from the pencil rub off and stick to the paper. The graphite stays there until it is disturbed.

Some erasers damage the top layer of the paper and remove it as well. Softeners added to the rubber prevent the tearing of the paper. The stickier and softer the rubber lesser will the abrasiveness of it on the paper.

If you all remember there was this pink blue rubber which claimed that it could remove ink stains too. 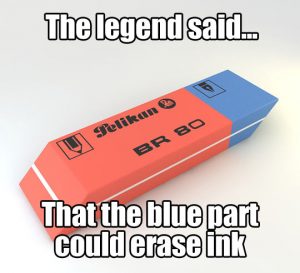 FYI, the blue part was mainly for erasing pencil marks on the grainy art paper. For that, the blue part was made a little coarse and grainier as compared to the pink part. Thus, it would require less amount of work/force to erase something written on these rough paper ad make the task easier. It actually removed a layer of paper. We are not sure if it could actually remove the ink of a pen, but for sure it did a lot of damage to the paper.

Who would have thought that it is friction that gives the rubber the magical power of erasing? Hence, you are free to make mistakes (on the paper), because the savior the Eraser is there to save you.