Home » Aside » Fire-walking – The Science Behind It

Fire-walking – The Science Behind It

A smoldering bed of coal with people walking on it barefoot so casually like it is some bed of roses.

Fire-walking has astonished many since time immemorial. The act of walking on those burning coals just seems to be impossible. The feet not getting barbequed even after walking on the seething bed which has a temperature of approximately 2000 degree Celsius.  Is it some spiritual or magical power or some paranormal phenomenon that save us from burning?

The first thing that we all need to understand is that Fire-walking is no magic. It is sheer Science. Before we get into the intricacies of the matter, let us look into its history.

If we dig deep into the history of Fire-walking, it is seen that it dates back to the Iron Age India – 1200 BC. It has been a part of diverse cultures, around the Globe like that of Greece, China, Srilanka. South Africa, Malaysia, Singapore etc.

It was used as the means of portraying courage and religious belief at some places, or used as the rites of healing or to prove oneself innocent of some crime or as a part of the celebrations.

Fire-walking still persists and is practiced at many places. Some do it for fun while others have religious beliefs linked to it.

The science behind it.

You must be getting very curious to know the science of fire-walking. So, let’s get straight to the explanation.

Fire-walking is nothing but physics put to its best use. The Fire-walking depends on a combination of poor conduction, insulation, and a short time span. 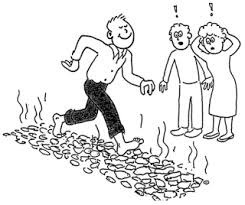 Thermal conductivity is the ability of a substance to transfer energy in the form of heat to an object with which it has come into contact. In this case, the transfer of heat is from the hot coals to your naked feet.

The coal, ember or wood that is used to make the fiery bed are substances which actually have a very low thermal conductivity. These substances are made up of carbon, some "volatile organic molecules," and water. Most of the composition is occupied by the magical element – Carbon. On burning, the volatile component and water evaporate in the air. What is left behind is nearly pure carbon. And carbon is terrible when it comes to conducting heat. Thus the burning coal (mostly carbon) takes a long time to transfer the heat to the skin of the feet. The long time to transfer the heat is the main reason why our feet come out unburnt.

Imagine walking on a red-hot metal plate. Insane isn’t it?  Metals have very high conductivity and walking bare feet on red-hot metal would give you third-degree burns in milliseconds.

Insulation – Usually the bed of coal is coated with ash and even the fire-walkers put a layer of ash on their feet before walking on fire. The ash layer atop acts as an efficient insulator as it is a poor conductor of the thermal energy. Moreover, ash itself is not burning and has no heat. Thus, it makes walking on those impossibly 2000 degrees’ coal bed a lot easier.

Walking and not running- All that the fire walkers do is have a brisk walk, you will never see a fire-walker standing at one place.

Brisk walking ensures that the feet do not stay in contact for long and also that optimum pressure is applied by the feet on the coal bed. You also get across the bed of coals very quickly, and that limits your total amount of coal time. So, your foot never gets hot enough to burn. The arched structure of our feet also ensures minimal contact with the coal.

Running may decrease the time of the point of contact but it surely does increase the pressure and the feet may sink into the burning coal layer and get burnt.

Water or sweat – It is thought that, if one dips their feet in water before walking or if the feet is covered with sweat then according to the ‘Leidenfrost effect’ the steam formed insulates our feet. The Leidenfrost effect states that when a liquid is in near contact with a mass significantly hotter than the liquid's boiling point, them it produces an insulating vapour layer keeping that liquid from boiling rapidly.

But, dipping in water may help a coal stick to your feet causing them to burn.

The success of Fire-walking depends on some other factors too which are:

Preparation – the coals are prepared properly that is they are lit well ahead of time to allow the wood to burn down to non-flaming coals. The coal is spread in such a way that the layer is flat and not uneven. The event is always held at night so that the coating of ash is not visible. At night the glowing red light is still visible through this layer of ash.

Although it is advised for people who are not trained to fire-walk to even give this a try, if you ever want to, make sure you do it under adult supervision and when the medical aid is handy.