Home » Aside » What Makes You Sneeze?

What Makes You Sneeze? It was a Sunday afternoon and Mayra’s mom was grinding pepper in the kitchen. 11-year-old Mayra was playing in her room. It had been a while and she started feeling hungry. She came running to the kitchen looking for her mother to ask her something to eat. Just as she entered the kitchen, before she could even say what she wanted, she went “Ahhh…Choo!!” not once, not twice but three times. Once she was done with her multiple sneezing, she asked her mother who was laughing by that time, “Mom, why did I just sneeze even though I don’t have cold?”

Mayra’s mom explained that it was not essential to have a cold or sore throat in order for someone to get the feeling to sneeze. Even the slightest tickling inside the nose causes people to sneeze, and in her case it was the pepper that she was grinding that got to her. Sneezing, called ‘Sternutation’ is the body’s way of attempting to remove an irritant from our noses.

Sneezing is a physiological response to the irritation of the respiratory epithelium lining of the nose caused by chemicals. Physical irritants like smoke, perfumes, allergens and cold air or viral respiratory infections can be the cause of chemical release. Eosinophils and mast cells, typically found within the nasal mucosa come into play and initiate the inflammatory reaction. Chemicals such as histamine or leukotrienes are released and the process begins. As a result, the nerve ending is stimulated leading to the sense of itching or tickling of nose.

The stimulated nerve ending leads to the activation of a reflex inside the brain. The nervous impulse travels up the sensory nerves and down the nerves controlling muscles in the head, chest and neck, and that leads to the rapid expulsion of air. The buildup of pressure inside the chest with closed vocal cords results in high velocity of the airflow. When the cords open suddenly, the air flows back up the respiratory track with a pressure, thus expelling the irritants. This helps in removal of the offending particles present inside the nose.

Does your heart stop?

The changing pressure in your chest due to sneezing also changes your rate of flow of blood, which may change the rhythm of your heartbeat. The speculations about the heart stopping during a sneeze would have resulted from the sensation of having the heart “skip a beat”. When there is a prolonged delay before the next heartbeat, that beat is then more forceful and more noticeable, perhaps as a funny sensation in the throat or upper chest.

Does it occur during sleep?

Sneeze does not occur while sleeping due to REM atonia – a bodily state where motor neurons are not simulated and reflex signals are not relayed to the brain. The nerves involved in nerve reflex are also resting when you sleep. So, a person does not sneeze while dozing off.

Why in a series of three usually?

Sometimes a single sneeze is not enough to let the irritants out of our system. So, in order to get deeper irritants out, triple sneeze follows. The first sneeze breaks up the irritant, the second one brings it to the nose and the third one finally shoots the irritant out. So, there you go on and on.

Why do we close our eyelids?

The popular myth has it that our eyeballs will pop out of their sockets if we sneeze with our eyes open. But, don’t you worry. Nothing of that sort will happen as our eyeballs are securely tucked inside. Hence, you will not end up with an annoying face. Sneezing is an involuntary reaction and so is closing of eyelids. One of the reasons of closing eyes is because an ample number of germs are released while sneezing. Hence, in order to avoid them from getting inside our eyes, we usually close our eyes. Or for that matter, eyelids shut down because one of a series of muscles tighten because of the involuntary response. For people out there who sneeze with eyelids open can leave us your comments.

Saying ‘God bless you’ is an act of common courtesy when a person sneezes. However, the fallacies and 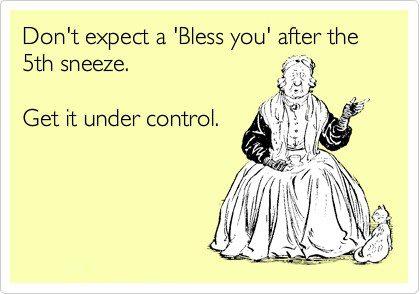 superstitions associated with it are quite funny. It was believed that, when you sneeze, the soul leaves its body temporarily leaving behind a temptingly vacant shell for the devil to swoop in and occupy. Hence, a “God bless you” is used to safeguard the sneezer’s soul as per the myth which dates back to 1500 years ago.

The story also has it that, the Romans and ancient Greeks enjoyed sneezing as they considered it as a sign of good health. They celebrated by saying “live long” when somebody sneezed. But things turned around in the 14th century when a plague broke out during the time of Pope Gregory VII. In order to ward off this vicious illness from attacking the people, “God bless you” phrase was practiced.

Do you lean forward when you sneeze?

One might have observed that a person tends to move forward when they sneeze. Though, our whole body does not move forward. Newton’s third law of motion holds good here. Imagine a horizontal axis passing at the level of your shoulders. When we sneeze, our respiratory muscles contract and glottis opens up to expel the air. Simultaneously, the abdominal muscles contract causing a rise in the intra-abdominal pressure. Thus, the nostrils along with the whole of upper airway tract and head move forward because of the force of air velocity. In order to balance the forward motion of our head, the lower half of the body moves backwards along the horizontal axis. So equal and opposite forces act in accordance with the Newton’s law.

Sneezes release more than 500 droplets of mucus at a speed of up to 100 mph. As per the researchers at MIT a sneeze travels as far as 8 to 10 meters.  So now you know why merely turning your head to one side and letting go is frowned upon. Make sure you

cover your mouth to avoid the germs spreading any sort of contagious disease. However, the practice of covering your mouth with your palms and sneezing is not the best way to deal with it. The palms are how you grab things and hence by doing this, you increase the chances of contaminating your surroundings. It’s always a good practice to use your handkerchief to sneeze into. If you belong to the generation who does not believe in carrying one, well, you could use the cradle of your arm to sneeze into too.

Published in Biology and Physics