Home » Funny Bone is not a bone

Funny Bone is not a bone

Mr. Dev was teaching about the skeletal system to his class in the school where he worked. However, all his efforts to make the class interested in the topic that he was teaching was seemingly in vain. The students were finding the topic extremely mundane. Most of them, were dosing. Harsh was one of such students.

Being in the third row, the Dev could clearly see him. He started approaching Harsh and called out his name loudly. Harsh woke up with a jerk from his stupor as his elbow slipped on the desk. He cried out loud as an excruciating pain enveloped his arm. It was just too much for him to bear.  Seeing this Mr. Dev quickly reached out to him and rubbed his elbows to ease the pain. He winked and said “Child, you have hit your funny bone”.

Suddenly, everyone was all ears to what Dev was saying. The boring class had turned into an interesting one. Dev was more than happy to see this and explained further.

What is funny bone?

He went on to explain. “Everyone would have experienced this tingling pain when we hit our elbow inadvertently somewhere,” he said. “You all must have heard the term funny bone”, he added. Everyone in the class nodded since somewhere or the other, each one had experienced this. Dev said, “Well, the pain isn’t funny as the name of the bone. The word ‘Funny bone’ itself is a misnomer. The funny bone is not a bone at all.” “Do you know what it is?” he asked. There was a pin-drop silence in the class. No one really was aware of this. Dev went on. “The funny bone is not a bone, but a nerve called the Ulnar nerve. The ulnar nerve runs near the Ulna bone. This nerve runs from the back of the arm and around the inner part of the elbow and into the forearm.

Why is it then called the Funny bone?

This name is based on the sound resemblance between the name of the bone of the upper arm, the "Humerus"  and the word "humorous". It is thought to be an anatomical pun. Humerus, is one of three bones that make the elbow joint.

The other theory is that it got its nickname because of the funny (or the odd) feeling you experience after you hit it.

Why does it pain so much ?

When we say that we hit our funny bone, we are actually hitting the nerve against bone and

squeezing it. Sometimes the Ulnar nerve gets compressed at the wrist, beneath the collarbone, or as it travels out of the spinal cord in the neck region. But the most usual place where the nerve gets squeezed is below the elbow. . As the nerve is very near to the periphery, it is close to your skin, and bumping it causes a shock-like feeling.

The compression of the nerves, makes the signals go haywire and results in a cascade of feelings like that of numbness, tingling and pain that shoots through the areas wherever the nerve runs. In human anatomy, this nerve can cause an electric shock-like sensation by striking the medial epicondyle of the humerus. 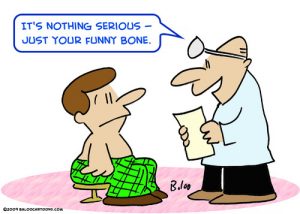 The explanation was over and so was the class. Thanks to the funny bone or should we say ‘The Ulnar Nerve’, which made the class interesting enough that none of the students dozed off. Mr. Dev. was overwhelmed with the response of the students and thought that he should always incorporate such examples while teaching.