Home » Aside » How Gun Silencers Work?

You are watching a James Bond Movie. The protagonist is making his way through the crowded place. He takes out a gun and shoots the enemy. The enemy drops dead and James Bond walks away uncaught. Glued to your seat you wonder, how on earth did he even manage to pull off such an act? Well, Gun Silencer is the answer to your query.

Let us dig deeper into the world of Gun Silencers.

Gun silencers – The word ‘silencer’ is actually a misnomer. These aren’t actually silencers, as it is not possible to silence the noise of a gunshot completely. Instead, these units are more like suppressors – sound suppressor or moderators, if you like.

These are devices that one needs to attach to the barrel of a firearm or gun, which then help to reduce the amount of noise and visible muzzle flash generated by firing of the gun.

The noise of the gunshot is due to three major reasons:

1. Muzzle blast – It is the visible light of a muzzle blast, which expels high-temperature, high-pressure gases from the muzzle (the open end of the barrel of a gun). The blast and flash are caused by the combustion products of the gunpowder, and any remaining unburned powder, mixing with the ambient air. When a bullet is fired, the gunpowder in the bullet gets ignited. The gunpowder creates a high-pressure pulse of hot gas. The pressurized gas forces the bullet down the barrel of the gun. When the bullet exits the end of the barrel, it is like uncorking a bottle. The immense pressure of the order of 3,000 pounds per square inch (psi) (which is like really high) makes the ‘POP’ extremely loud.

2. Sonic boom – A sonic boom is the sound associated with the shock waves created by an object traveling through the air faster than the speed of sound. Sonic booms generate enormous amounts of sound energy, sounding much like an explosion.  If a bullet travels at supersonic speeds it creates a sonic boom that adds to the loudness of the gunshot. The sound created by the sonic boom is difficult to suppress. The gun silencer is not of much use in this case. To suppress this noise, subsonic bullets are used which travel at a speed less than the speed of sound.

The construction and design of the suppressor.

The suppressor is typically a hollow metal tube manufactured from steel, aluminium, or titanium and contains expansion chambers. This device, typically cylindrical in shape, attaches to the muzzle of a Some can be detached while other are an integral part of the gun.

Baffles – Baffles are usually circular metal dividers which separate the 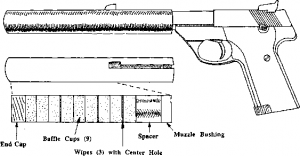 expansion chambers. Each baffle has a hole in its center to permit the passage of the bullet through the suppressor and toward the target. These are made of stainless steel, aluminum, titanium, or alloys.

Spacers – these separate baffles and keep them aligned at a specified distance from each other inside the suppressor.

Wipes – Wipes are inner dividers intended to touch the bullet as it passes through the suppressor, and are typically made of rubber, plastic, or foam.

Packing material – Some suppressors (usually wet suppressors) use a small quantity of water, oil, grease, or gel in the expansion chambers to cool the propellant gases and reduce their volume. Packing materials such as metal mesh, steel wool, or metal washers may be used to fill the chambers and further dissipate and cool the gases. Gun silencers work by gradually reducing the pressure and velocity of the gas behind the bullet so that, so that by the time the gases hit the atmosphere they do not have the pressure to create a loud noise. A silencer has a huge volume compared to the barrel (20 or 30 times greater). These work by providing a large space for the pressurized gases to expand. The result being that the pressure of the hot gas falls significantly. The gases that propel the bullet are diverted through the baffles and the spacers. They allow the gases to cool and spread out. The baffles slow down the gasses to the point where their exit does not make much of a sound.

By using subsonic ammunition, one can lessen the sonic boom and increase the effectiveness of the suppressors. Thus, the use of suppressor may reduce the pressure to a pressure as low as 60 psi. Therefore, the sound of the gun firing is much fainter.

Other benefits of a silencer include reduced recoil, better accuracy, smaller muzzle flash, and less damage to nearby ears. Suppressors reduce firing recoil significantly by diverting and trapping the propellant gas. 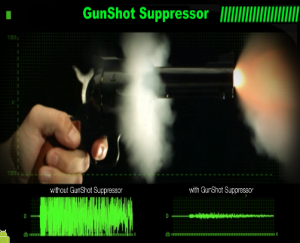 The suppressors drastically reduce flash, which can be a huge advantage for military personnel, particularly in night operations or for snipers.

A typical gunshot is 140-190 dB, depending on the weapon, which is any which way louder than the safe decibel range for the human ears (less than 85 dB). The suppressors decrease the sound by around 30dB.  Modern day silencers typically can reduce the noise by about 14.3-43 decibels, depending on a variety of factors, such as whether it’s a subsonic bullet or not; length of the barrel/silencer; etc.

So, now you must have understood the reason why ‘Bond’ was not caught. Apart from his charisma and Bond luck, it was the silencer/suppressor and may be the use of subsonic ammunition the reason for his great escape.