The international aid for the education in India has received $806 million in 2014. This is nearly double of what it received in the year 2013; which was $421 million, according to the data compiled by UNESCO for a global education and monitoring report.

Amongst the donors The World Bank topped the charts, followed by EU institutions, the UK and Germany. 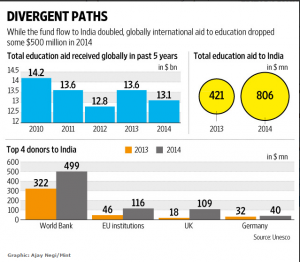 While the global international aid to education dipped from $13.6 billion in 2013 to $13.1 billion in 2014 , the aid to India doubled. With such great funds, there is a positive vibe that it will allow India to solve the problems in the Education sector by putting the money to great use.

India, however, has been maintaining that the number is less than $10 million. According to Kate Redman, a member of the team that prepared the aid monitoring report – “This is a positive for India. These increases should allow the country to tackle the areas of unfinished business in its education story, including the substantial amounts of adolescents still out of school, and the pervasive levels of adult illiteracy still remaining,” Out of the 124 million children and adolescents worldwide who are out of school, 17.7 million—or 14%—are Indians, according to a 2015 UNESCO report. – Source Livemint.

The increasing fund shows that the Investors have faith in the Education industry of India. To keep the funds flowing in, the country needs to use it towards improving the education in the country. Sanjay Singh, Co-founder at Zigya Technology Labs Pvt. Ltd. says in a company communication, “We are very excited to hear about the report. The education industry in India needs such impetus to combat the prevailing challenges and utilise technology to make education affordable and to increase outreach to the underprivileged sections of the society.”

Zigya is into democratization of education and offers free Resource Center for students of Classes 8 to 12. “Our aim is to make education accessible across socio-economic strata and provide a level playing field to all students. We need to work with the government to ensure that the incessant commercialization of education is thwarted and the students stand to benefit from such developmental initiatives”, says Abir Basak who jointy founded the company in 2014. Zigya has its reach in all states in India and also has members based out of UK, UAE, Australia and the US.