Home » What is Linear Regression in R?

What is Linear Regression in R? 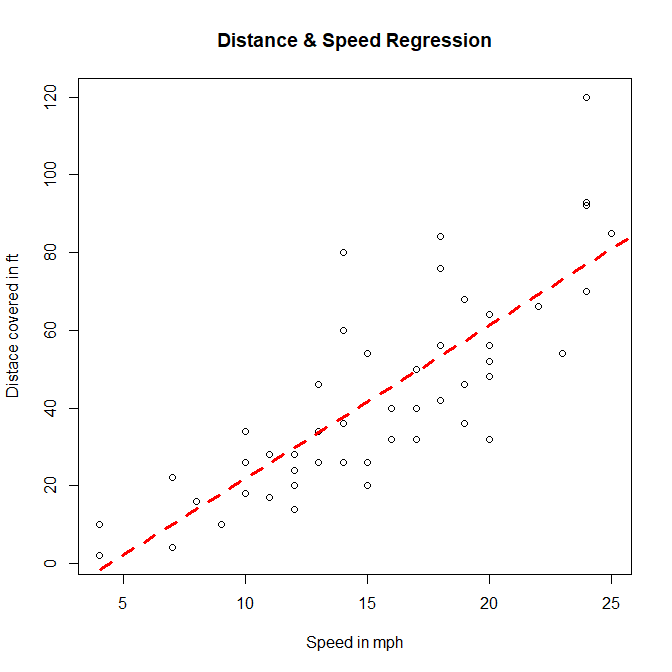 In this article, you will learn the basics behind a very popular statistical model, the linear regression.

What is Linear Regression

In Linear Regression these two variables are related through an equation, where exponent (power) of both these variables is 1. Mathematically a linear relationship represents a straight line when plotted as a graph. A non-linear relationship where the exponent of any variable is not equal to 1 creates a curve.

The general mathematical equation for a linear regression is −

Description of the parameters used −

Moreover this analysis, we will use the cars dataset that comes with R by default. cars is a standard built-in dataset, that makes it convenient to demonstrate linear regression in a simple and easy to understand fashion. You can access this dataset simply by typing in cars in your R console. You will find that it consists of 50 observations(rows) and 2 variables (columns) – dist and speed. Let’s print out the first six observations here.

Before we begin building the regression model, it is a good practice to analyze and understand the variables. The graphical analysis and correlation study below will help with this.

Density plot – Check if the response variable is close to normality

A value closer to 0 suggests a weak relationship between the variables. A low correlation (-0.2 < x < 0.2) probably suggests that much of variation of the response variable (Y) is unexplained by the predictor (X), in which case, we should probably look for better explanatory variables.

Now that we have seen the linear relationship pictorially in the scatter plot and by computing the correlation, let’s see the syntax for building the linear model. The function used for building linear models is lm(). The lm() function takes in two main arguments, namely: 1. Formula 2. Data. The data is typically a data.frame and the formula is an object of class formula. But the most common convention is to write out the formula directly in place of the argument as written below.

lm is used to fit linear models. It can be used to carry out regression, single stratum analysis of variance and analysis of covariance (although aov may provide a more convenient interface for these).

Now that we have built the linear model, we also have established the relationship between the predictor and response in the form of a mathematical formula for Distance (dist) as a function for speed. For the above output, you can notice the ‘Coefficients’ part having two components: Intercept: -17.579, speed: 3.932 These are also called the beta coefficients. In other words,
dist = Intercept + (β ∗ speed)
=> dist = −17.579 + 3.932∗speed

Now the linear model is built and we have a formula that we can use to predict the dist value if a corresponding speed is known. Let’s begin by printing the summary statistics for linearModel.

How to know if the model is best fit for your data?

The most common metrics to look at while selecting the model are:

Now we can predict the distance for any speed

The basic syntax for predict() in linear regression is −

Hence, we show what is Linear Regression in R, what is Correlation, and how to build your own linear model along with how to diagnose your model whether it is the best fit or not. We also show how to predict values with the model we built and see the result. and in last we represented our linear regression using plot() function.