Ever since the first chunk of mammoth meat was dropped into the fire by human beings, newer ways to cook things have been explored. In this race of discoveries to make food even tastier, the microwave oven, which uses the microwave radiation to heat and cooking of food, has caught the attention of one and everyone.

Percy Spencer, an American engineer from Howland, while sitting in his laboratory in 1945, noticed that the candy bar in his pocket melted because of the microwaves emitted from a radar set kept nearby. The first food cooked using spencer’s microwave was popcorn and the second, an egg, which incidentally exploded on the face of the experimenter. Further experiments were conducted and it was observed that the temperature of the food rose rapidly.

The microwave oven was first used for a public purpose when this speedy teeny-weeny vending machine was first placed in Grand Central Terminal to dish out sizzling hot dogs. Since this gadget uses less energy and is faster to cook as compared to a gas or electric ovens, the microwave oven has found a spot in most homes.

How exactly does the microwave oven convert electricity into heat? Inside the very strong metal box, there is a 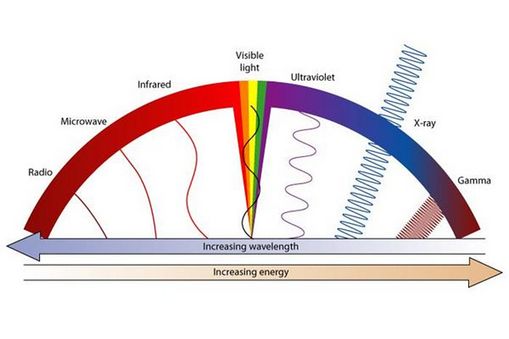 microwave generator called the magnetron. The magnetron is an electron tube for amplifying or generating microwaves, with the flow of electrons controlled by an external magnetic field. When the power is switched on with food kept inside, the magnetron uses electricity and converts it into high-powered, approximately 12 cm radio waves. These waves find their way to the food through a channel called the wave-guide. 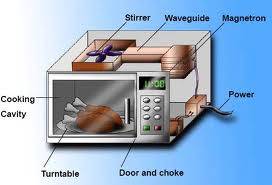 Thus, the microwaves pass their energy onto the molecules in the food, rapidly heating it up.

There is a turntable inside the microwave oven, onto which the food is kept. This enables slow spinning of the food, which helps it to cook evenly.

The food should not come outside the oven, when getting heated up. That is why the case is made up of metals. This metal cage traps all the microwaves inside the oven (like a Faraday’s cage) and bounces off around from wall to wall until hitting something, which can absorb them.

If metals are used as a container for the food being heated, they will reflect the waves rather than them being absorbed by the food. Hence, the food would stay cold. When the absorption of the waves does not happen, they accumulate and get reflected back to the magnetron, damaging the device. This is the reason microwave-safe utensils is recommended to be used for reheating the food. A metallic object with a sharp point should not be used because the charges will build upon the tips, causing ionisation of particles, thus allowing excess charge to jump to the nearest conductor, creating sparkling.

The most efficient way to reheat the food until this day remains the Microwave oven. The basic mechanism involved in the process has not changed much since its development, but has only got cheaper because of the increasing efficiency of manufacturing. Therefore, microwave ovens are likely to remain a mainstay of the kitchen in the years to come.