Home » Aside » Optical Illusion or Reality?

With a parched look on his face, the man staggers and crawls towards, what he believed to be, a pool of thirst-quenching water. As an accomplished look settles on his face as he is almost reaching the pool of water, it suddenly disappears.

How many times have you seen such scenes being played out in the movies or even comics? The characters may have varied from a cowboy to a soldier fighting for his country to even good ol’ Tintin, but the allegory remained the same – man chasing an image of a pool of water that existed only in his mind. The existing image in his mind is a mirage formed and is an optical illusion of light and vision.

A naturally occurring optical phenomenon, mirages are formed when light rays bend to produce a displaced image of the distant objects or the sky. It is derived from the Latin word mirari, meaning “to look at, to wonder at”. The mirage formation is no hallucination, but it is a real phenomenon that can be captured on the camera.

Light would travel in a straight line if there is no temperature gradient in the air. However, light follows a curved path (from hot air to cooler air), if a steady temperature gradient exists. Cold air has comparatively a higher refractive index than the warm air. Therefore, the particles of light (photons) travel through the hot air faster than through the cooler atmospheric layer (hot air has higher density than cold air). When travelling from one point to another in the air, photons take the path which requires minimum time.

Formation of mirage is a direct consequence of photons taking the path of least time in vertical temperature gradient. When there is a rapid shift of air density in the atmosphere, for example on a sunny day, the air directly above the ground level is much hotter than the upper layers. The temperature of the air varies due to convection and there is a variation between the hot air at the surface of the road and the denser cool air above it. Hence, a gradient in the refractive index of the air is created. Therefore, the particles of light, bend at different angles through different layers of air, creating mirages.

Mirage formed in a desert

Let not the puddle of water that you see at a distance trick you in the wilderness. 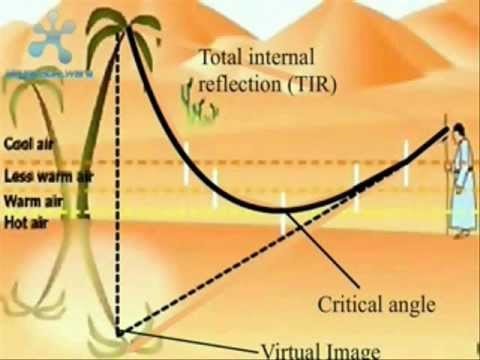 During day time, the sand is very hot. As a result, the layer of air in contact with the sand gets heated up and becomes less dense. The successive upper layers of atmosphere are denser than those below them. A ray of light that is coming downwards from a distant object, say a palm tree, gets refracted from denser to rarer medium. At each layer. Refraction takes place and the light ray bends away from the normal. So, the angle of incidence gradually increases, until at a certain layer, light is incident at an angle greater than the critical angle. Thus, the incident ray suffers total internal reflection at this interface and the light ray no longer suffers refraction but, gets reflected in an upward direction, from rarer to denser medium. The whole path of the ray of light is thus concave and due to this an inverted image of the object is produced. When this reflected light enters the observer’s eyes, an inverted image of the palm tree is seen and the sand looks like a puddle of water. 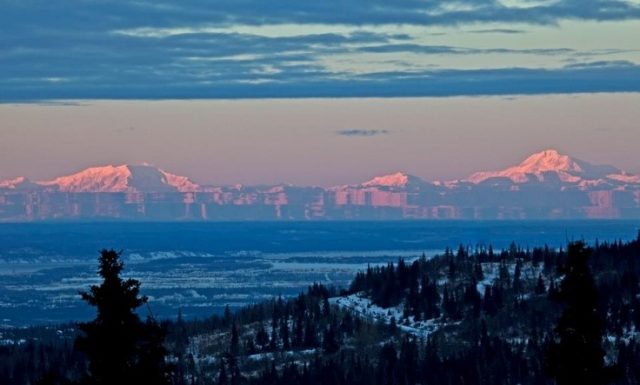 A mirage becomes more complex, when several boundaries of air are involved as the light is refracted multiple times. So, natural objects like cliffs, appear as city buildings, or castles in the sky. The Alaskan city mirage that was seen in the city can be plausibly explained by this phenomenon. Views are also such that, it was in reality a magnification of the English city of Bristol some 2,500 miles away.