Home » The Physics of Roller Coaster

The Physics of Roller Coaster 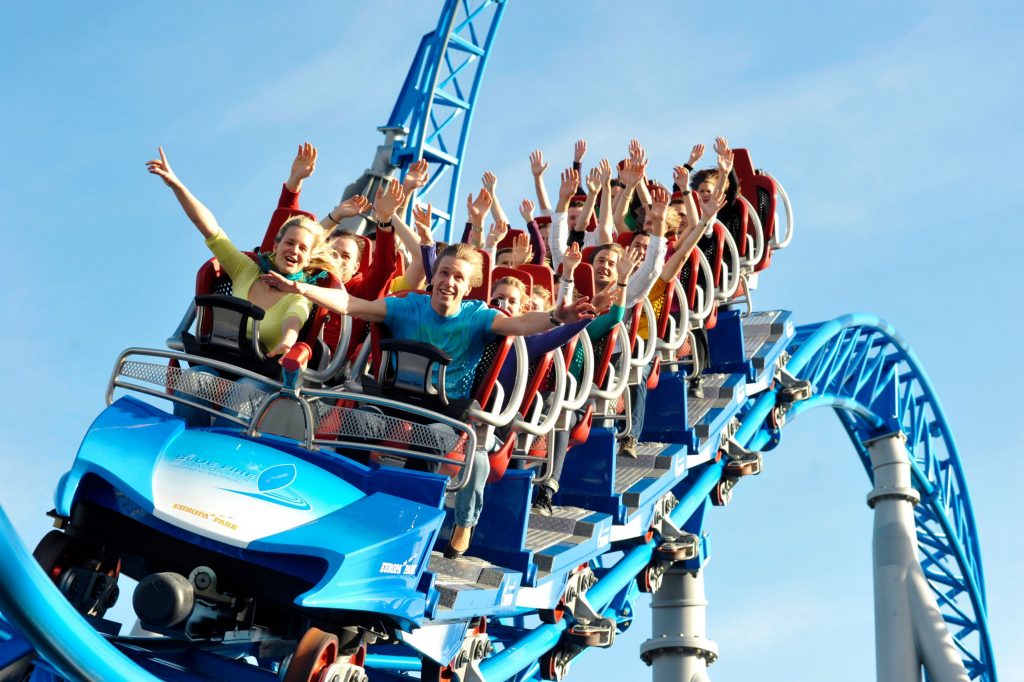 Amusement parks, according to me, are places where people go to experience an adrenaline rush to shake them out of their monotonous existences, and get scared out of their wits with every ride. The rides are designed to get your heart thumping against your chest and racing beyond limits. The screaming of people in different rides around is the most prominent ambient noise amalgamated with the music playing in the loudspeakers, which echoed in my ears, as I meandered through the paths inside the amusement park when I happened to visit it recently with my friends. As we stood in line for our turn, a combination of panic and ecstasy overwhelmed me. Part of my brain wanted me to run away from the ride, but the enthusiasm of getting into one of the most sought after rides could not be stopped.  As my turn came, I stepped forward and got into the receptacle. Hands trembled as the harness closed in. The ride began slowly, all cars trudging along being pulled against gravity, sending shivers up and down my spine. As the cars reached the pinnacle, it stopped for a brief moment before hurtling down mercilessly. Screams and shrieks filled the air and I realised that I too had joined in. The glorious moment of going upwards, downwards; left and right, twisting and turning, all happened in the blink of an eye. Finally, the short yet wild 60-second ride came to an end. As I got down, my legs were numb and my voice quivered.  This is nothing but my exhilarating experience on scream machine- the roller coaster.

Everyday people flock in thousands to the amusement parks to get onto their favourite rides. What causes the widespread excitement and keeps approximately 85 million annual riders attracted to this ride and keep them safe? Physics can possibly answer this question. In this article, we will focus on the principle that keeps roller coaster flying on their tracks and the forces that make the ride thrilling.

Once upon a time…

The history of roller coaster dates back to the 16th and 17th century. The dawn of the rides began in Russia; long, steep wooden slides covered in ice as high as 70 feet. Riders shot down the slopes in sledges made out from blocks of ice or wood, crash landing on a pile of sand. The idea of ice slide was imported by some French entrepreneurs to France. Due to the warm climate of France, the ice melted. This gave way to the manufacturing of waxed slides instead, eventually adding wheels to the sledges. The manufacturing and designing ideas were further expanded by the Frenchmen. Thus, complex track layouts with multiple cars, twists and turns evolved.

The cars store a large amount of gravitational potential energy by cranking them on top of the first hill. The mathematical formula of Potential energy is given by,

m is the mass of the object,

g is the acceleration due to gravity, and

h is the height of the object.

Once on board, the ca

rs start cruising uphill. While pacing down, the stored positional or potential energy is converted into kinetic energy. The cars hurtle downwards due to the force of gravity and they accelerate more and more on moving downhill. The height of the first drop from the first hill also determines the speed of the coaster cars. Longer the drops, more is the acceleration of the cars due to the force of gravity. The energy constantly swaps back and forth between kinetic and potential energy during the course of motion.

Technically, with the constant conversion of energy, the roller coaster must never stop. But in reality, when the wheels rub against the track, the frictional force comes into play. The potential energy initially stored by mounting the coaster on the top hill is used up by the frictional forces. In addition, air resistance and the rattling noise, the roller coaster produces consume some of the potential energy. So the cars run out of energy. This is the reason that the loops are made smaller at the ends. And the cars finally come to an end.

The secret behind the thrill While energy makes the roller coaster ride last, the forces make the ride elated. It is the forces that knock us rearward, pushes us headlong; for a minute the force makes us as light as a feather and in another moment as weighty as a rock. When you are suddenly spinning upside down the loop, it is the forces that keep you safely in your seat. The contributing forces that the ride thrilling are:

Sometimes the boisterous movement of the coaster is enjoyable for many but at the same time nauseating for some. The body sensation during the ride is complemented by visual cues – upside-down turns, dizzying altitudes and passing buildings. The visual cues tell you that you are going wild and reckless. The body does not feel the velocity but just the change in velocity (acceleration). The roller coasters are designed to give you the moment of thrill. So sit back, relax and enjoy the ride.