The state of Punjab is one of the two states that have a Union Territory as their capital, the other being the state of Haryana. Punjab is also the state that had to bear the brunt of the partition in 1947 during independence of India, when a patch of the state on the western side was engulfed in by Pakistan. The state now shares the International border on its western front with the Islamic stateof Pakistan. In view of the sensitivity associated with it, the country’s Border Security Forces (BSF), a Para-military outfit primarily employed to safeguard the borders of our country, mans this international border. Not only does do their responsibilities lie in guarding the border to check infiltration into the country, the BSF also is up against arms to check the menace of drug traffickingas well as the potential terror induced into this state from across the border. 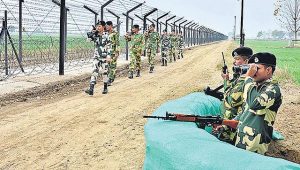 The youth of this border state are flushed with contraband drugs. There exists deep-rooted nexus in Punjab between the drug cartels, transnational criminals, who runs the racket from jails and the politicians. The international border with Pakistan is flanked by an agricultural tract, which has given the smugglers additional hand to pump the menace into the state.

Punjab is the only state in India where the Sikhs are in majority numbers, considered as a minority community within the country. Sikhs are considered the marshal race in India, as their legendary tales are many and arduous to enlist. The social ethos here is largely influenced by religion; an implication of this was showcased in the clamour for Khalistan, a secessionist movement for Sikh land. The state has been bifurcated to cater to the demands of the Sikhs mostly Punjabi speaking, which had resulted in the formation of Himachal Pradesh and Haryana in 1966, two predominantly Hindi-speaking states.

The peak of Khalistan clamour was the prevalence of militancy in the state, whe 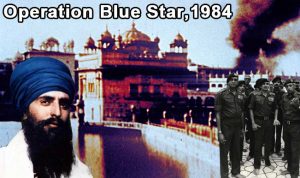 re a Sikh religious leader Sant Jarnail Singh Bhindranwale was propped by Congress party as alleged to counter the Srimoni Akalis Dal, Sikhism-centric political party in India. The stature of Bhindranwale had grown so phenomenally that he had started dispensing justice to the people, setting aside procedural arbitrator. The cloud of Khalistan movement was dispersed by then ruling dispensation at the centre, led by Indira Gandhi by launching “Operation Blue Star” in which the Sant Jarnail Singh Bhindranwale was smoked out by the security forces from the most revered shrine of Sikhism, the Golden Temple, where he had holed up with huge cache of arms. The resultant of this was the assassination of then Prime Minister of India, Indira Gandhi by the Sikh bodyguard of Delhi Police, who confessed it to be an act of vengeance for denigrating Sikh sentiments and shrines. 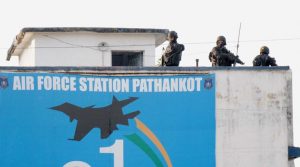 The vulnerabilities was further exemplified with the attack on Pathankot Air Base of Indian Air Force, when a bunch of Jihadi, surgically trained, sneaked into the air base to create mayhem, which was pre-empted by the alert security forces and thereby resulting in fewer causalities. Reports have surfaced that attempts are being made to revive Khalistani movements, with tacit aid from the neighbouring Islamic State as it has failed to light the fire of secessionism in Jammu and Kashmir. The desecration of Guru Granth Sahib, the holy scriptures of Sikhs in different parts of the state, which had incited the Sikhs there, was slice of this sinister ploy. Whether this done at the behest of non- state actors of Pakistan or not, is yet to be ascertained and possibly will never be known. As an act of catalyst Punjab’s ruling Shiromani Akali Dal-controlled Shiromani Gurdwara Parbandhak Committee (SGPC) had installed a portrait of slain Khalistan militant leader Jarnail Singh Bhindranwale in the Golden Temple museum at Amritsar. The Chief Minister of Punjab, Prakash Singh Badal, SAD president Sukhbir Singh Badal and Shiromani Gurdwara Parbandhak Committee (SGPC) chief Avtar Singh Makkar were asked by the sikh priest to meet the President and take appropriate steps through the State and Union governments to ensure the unconditional release of Babbar Khalsa International terrorist Balwant Singh Rajoana, who was convicted for the assassination of former chief minister Beant Singh.

The political stake is also very high in Punjab with the emergence of third political outfit apart from the SAD, which is an ally of the ruling dispensation, BJP at the centre. The congress, which has the distinction of having the longer political reign has not only failed to curb the menace but also had failed to stem the vulnerabilities.

There is a possibility of opening up another front in Punjab by the State actors of Pakistan to suit their mission of bleeding India through persistent and multiple cuts.