Home » Aside » Science Behind Quicksand

Susan was out on a jungle safari. Being in the midst of the natural flora and fauna was a great experience and she was enjoying it to the maximum. As she was coming to the end of her journey she caught the site of a Lion at a distance. Susan had always been fascinated by the majestic animal. Maintaining a safe distance, she decided to get down from her jeep and watch the animal. She found the perfect spot in the bushes from where she had a clear view. She was way too happy. Suddenly she could feel herself sinking into the ground. To, her horror, she had stepped onto a quicksand puddle.

The more she struggled, the deeper she sunk. Helpless, she thought that she would never be able to come out.  Fortunately, the other people in her group saw her sinking and helped her out.

Susan could not forget the horrifying experience. But she was very curious about how the quicksand swallowed her in.

Like Susan, many of you out there must be curious about the working of the Quicksand.

Do not worry. We are here to explain the Science behind the Quicksand.

Quicksand is no monstrous or alien substance. Quicksand is nothing but a colloidal hydrogel consisting of fine granular materials such as sand, silt or clay, and water.

The quick nature of it is due to the peculiar mix of sand clay and water. When water in the sand cannot escape, it saturates the sand and creates a liquefied version that loses strength and cannot support the weight. It can form in standing water as well as in upwards flowing water. The seepage forces oppose the force of gravity and suspend the soil particles in the case of upwards flowing water.

Quicksand is a Non-Newtonian fluid and may appear solid like when undisturbed. It is the change in pressure or stress that triggers the 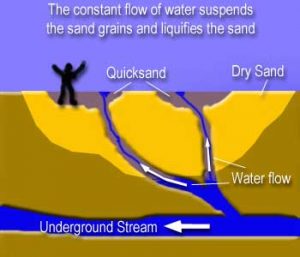 liquefaction process. The water saturates the sand. The normal sand can support the extreme amount of weight, but the presence of water reduces the friction between the sand particles that was mainly responsible for the ability to support the weight.  The cushioning of water gives quicksand, and other liquefied sediments, a spongy, fluid-like texture.

Vibrations are also responsible for the formation of the Quicksand. Earthquakes or some other high vibration source can increase the pressure of shallow groundwater thus liquefying the soil. This is the reason why buildings sink even by more than a foot following an earthquake.

It is often thought that the quicksand can swallow the whole person or animal as a whole. All this is a myth.

Objects in the quicksand sink to the level at which the weight of the object is equal to the weight of the displaced soil/water mix and the submerged object floats due to its buoyancy. The density of quicksand is 2 g/ml which is about twice that of a human body (1 g/ml), Thus, a human should sink only half way in (till the waist line), in case he/she does not struggle. Even objects with a higher density than quicksand will float on it—until they move.

We now know that quicksand is formed when water saturates an area of loose sand. Quicksand appears to be a solid when undisturbed.

But, it is highly sensitive to any force/stress applied to it. Just a 1% change in stress causes the viscosity of the mixture to drop by a factor of nearly a million, turning  the quicksand from solid earth to a gooey liquid.

When any force is applied to it, the liquefaction process is initiated immediately. The viscosity decreases, as the water decreases the friction between the particles of the sand. This turns it into a sloshy liquid.

Because of reduced friction the sand is not able to bear any weight and collapses when any forces overcomes the friction holding the grains together.

The sand particles get displaced and the animal/human sinks in it.  Objects in liquefied sand sink to the level at which the weight of the object is equal to the weight of the displaced soil/water mix.  Since Quicksand has a density twice than that of human, thus a person is usually trapped to their waist.

As the weight of the organism becomes equal to that of the displaced quicksand, the liquefaction process stops and the sand eventually forms a semi-solid bed again. The denser sand grains hold the animal tight, preventing it from escaping.

How to escape quicksand? If you ever get trapped in a quicksand puddle, never ever struggle. Because the more you struggle the more trouble you will get in.  Quicksand increasingly impairs movement and may lead to other things like weather exposure, dehydration, hypothermia, tides or being harmed by carnivorous animals.

What you can do is :

Try to wriggle your legs around. This creates a space between the legs and the quicksand through which water can flow down to loosen the sand. So, you can pull your leg and move forward slowly.

Drop all the bags or weight that you are carrying. The lesser the weight, the better it is because a person’s buoyancy decreases when their weight increases.

Lean backwards on your back. This will distribute the pressure of your body’s weight more evenly and by increasing the surface area and you will float. With your hands slowly paddle with short strokes on the surface. Once you’ve paddled to the edge of more solid ground, pull yourself out.

Well, quicksand is not so dangerous. It does have a sinister form that is called as Dry quicksand though there are no confirmed natural occurrences of it and is mainly prepared in the lab. Scientists make it by blowing air through the sand. Dry quicksand forms when grains of sand form a very loose structure that can barely hold its own weight. If a heavy object is dropped on this, it will instantly sink causing the whole sandy structure to collapse like a house of cards. The scary part is that it doesn’t stop there once this process is initiated; the energy from the collapse triggers a jet of sand whirling upwards, burying the object or swallowing it as a whole.

So the next time you go on a trip and you see a warning saying ‘Quicksand’, do not go near it and if you do get yourself stuck, you now know the Dos and the Don’ts to extricate yourself from it.