Home » Aside » The Strings of Lights – Series or Parallel?

The Strings of Lights – Series or Parallel?

The festive fever is catching up. Diwali is around the corner. Soon the whole town will light up with bright and shimmering lights. Strings of lights will adorn the roofs of every house in sight. Everything, right from shops to malls, parks, roads will be decked up with the different coloured lights.

The string of lights come in various sizes and colours. They come with timers that make them go on and off and make it seem like dancing lights. But as students, has anyone ever built one out of interest? Do we know whether, for instance, they are connected in series or parallel?

Let us delve deeper into the bright world of the lights.

We all know that a bulb connected to a source of power, glows when the electric current flows through it. The circuit has to be closed and complete for the current to flow.

As the current passes through the filament, it heats up the filament. The filament gets super-heated and emits the glow. The glass around the filament is to prevent the super-hot filament from coming in contact with the air, because if that happens, the filament would otherwise burn out.

Series connection – In this setup, the bulbs are connected in such a way that electricity passes from the source to the first bulb/ light and then to the second and so on until it reaches the last bulb and then return to the source. In a series setup, if one bulb blows out the circuit become incomplete and open. Current cannot flow in an open circuit, so all the lights fail and the entire string of lights goes dark.

But this does not happen with the light strings that we see around us. So are they in parallel then? Let us check out the parallel circuit.

Parallel connection – In this type of connection, each light is on its own circuit to the battery or power source. Thus even if one bulb goes poof, the other lights continue to glow as their circuit is closed and complete.

If you’re thinking that this means for sure that the lights are in connected in parallel, hold on to your horses. The complex wire circuit is not so simple as you may think.

In the actual string of lights, there are multiple wires in one string, several series of lights are together in parallel.  The strings are therefore connected in series as well as in parallel. In other words, holiday lights have both series and parallel connections.

That is why in such connections when one series of bulbs become defective , it has no effect on the other strings of bulbs attached to it in parallel. This is the same reason why there are times when only a portion of the lights goes out – because they are in series.

When only one bulb goes out in the series, the entire series turns off. In that case, if you are lucky enough to find the culprit bulb and replace it, the strand will glow again.

This is where the Shunt and Fuse come in for the rescue.

Shunt – It is a Device that allows current to continue flowing through a circuit by providing lesser resistance than the original path.

In the bulbs strings, the shunt is a small wire wrapped beneath the filament. These wires are coated with an insulator. Thus the electricity cannot pass through the shunt wire as long as the filament is intact, because the insulator coating creates a higher resistance initially than the filament.

However, if the filament burns out, the insulator material melts off,  revealing the lower resistance wire beneath allowing the current to flow and keep the remaining lights burning. The shunts serve to remedy an open circuit.

The Fuse –  The fuse prevents damage to the circuit from the voltage and current fluctuations. In the strings, the fuse is near the part of the plug which you insert in the electric sockets. As the electrical current increases, the wire heats up, If the current is too much the wire melts and the fuse sacrifices itself to save the rest of the bulbs in the string from the effects of fluctuations. 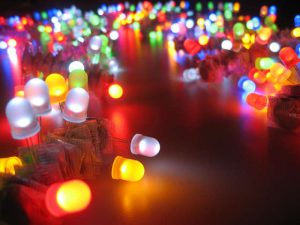 LED lights are a bit different from the traditional bulbs. They are sturdier and last longer. LEDs consume much less energy and are economical too.

The LED circuit is more sophisticated as compared to the traditional light bulbs.  It consists of a diode having a p-n junction — two semiconductor materials next to each other, one with a positive charge (p) and one with a negative charge (n).

The LEDs are wired in the same series-parallel manner like  just like the traditional bulbs. However, they do not have a shunt.  When a LED fails, it typically short-circuits, creating a path of lesser resistance acting in the same way as the shunt.

Blinker bulb – This a special bulb which is installed at any position in the strand. The bulb has an extra piece of metal at the top which is a bi-metallic strip. When the filament gets hot, this strip bends, breaking the current and extinguishing the bulb. As the strip cools, it bends back, reconnects and re-lights the bulb. When the blinker bulb is not lit, the rest of the strand does not get power. This is how with periodic on and off of the blinker bulb, the entire strand blinks along with it.

Controllers – that cause the light to glow in all sorts of interesting patterns. The controller box drives four separate strands of mini-bulbs. The four strands are interleaved rather than being one-after-the-other. It contains an integrated circuit and four transistors one to run each strand. The integrated circuit simply turns on a transistor to light one of the four strands. By sequencing them in different ways, you can create all kinds of effects!

Now that you understand the working , I am sure you can fix some minor issues in your LED string or even try and build one for yourself. Happy decorating!