Home » Aside » The Distorted Letters You are in a hurry to log in to a website, but, there comes the CAPTCHA with a picture of some crooked, distorted text that seems to be simply irrelevant and silly. You are asked to enter the optically baffling security code. Sometimes, they are so distorted that it seems almost impossible to decode them.

I am pretty sure, all of you out there must have come across the CAPTCHA text, haven’t you?

I encounter the CAPTCHA text or images on a daily basis because I spend some good number of hours online. CAPTCHA’s are everywhere. Whether you need to log in your email – they are there, even when you have to book the tickets – they are there, you need to pay a bill online and they are there too. I have had some pretty annoying experiences when I had to enter the text again and again, as I could not get it right. I have always wondered why these silly texts exist.

If you have ever wondered on what this CAPTCHA really does, follow my quest to know all about them. 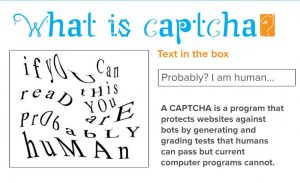 A CAPTCHA is an acronym for – Completely Automated Public Turing test to tell Computers and Humans Apart. It is a type of Turing test.

You must be thinking what exactly is a Turing test?

Alan Turing was a computer theorist who invented the Turing test which humans use to see if the machine can converse like a human being.

CAPTCHA is actually a Reverse Turing test because the test is administered by a machine to test whether you are a human or not, but the core principle remains the same.

Why is it used?

CAPTCHA are used for security purpose. These prevent bots from overrunning sites with spam, fraudulent registrations, fake entries, and malpractices etc. For example, Web-based email services like Gmail offer free email accounts to the users worldwide. Attackers can make use of the automated software to generate a huge quantity of requests or spam emails thereby causing a high load on the target server. This could degrade the quality of service of a given system. The CAPTCHA that we encounter during the sign-up process is to prevent the spammers from using machines or robots to make hundreds of fake mail accounts. They were invented to block spamming machines from posting wherever they want.

How do these work ? 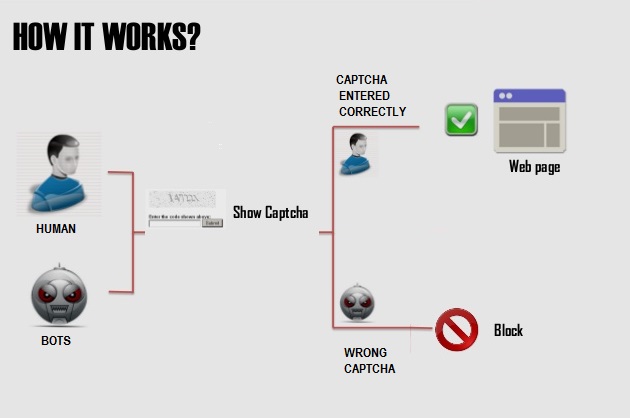 CAPTCHAs works by generating and grading tests that humans can decode and pass, but the machines or robots cannot.  The strings of characters are processed differently by the humans and the computer. It is this unique ability of humans to see letters that have been stretched or distorted or manipulate, that is used by this system to differentiate between the two. The computers lack the real intelligence that humans have by default.  It is possible for humans to look at an image and pick out the patterns than a computer. Sometimes, characters are stroked out or presented with a noisy background to make it, even more, difficult for computers to figure out the code.

The website blocks automated systems, which can't read the distorted letters in the graphic and thus secure themselves.

The distorted letters or numbers are the most common and old-fashioned type of CAPTCHA used. The

letters are twisted and distorted or have a strikethrough to increase the difficulty in decoding.

Picking the right images like Choose the cats out of the given set of pictures, adding or subtracting numbers are also used.

Now that I understand those distorted squiggly words that I struggled with are actually there for a reason, I hope I hate them less.

Published in General and Technology