Home » Aside » The Glowing Eyes

You are all alone in the house and the lights go off. To make things worse the backup is not working and it is dark. As you make your way to grab a candle, you see a pair of yellow glowing eyes in the faint light coming through the window. Those eyes are staring at you.

Scary isn’t it? No, we are not talking about the climax of some horror movie. If we tell you that those glowing eyes were not of some paranormal entity but your pet’s, then things might get less scary.

Everybody must have experienced that animal’s eyes glow in the dark. But, there are few who know the reason behind it. Well, fret not, we are here to explain the science behind those glowing orbs. Scientists refer to this phenomenon as "eye shine" or retro-reflection. 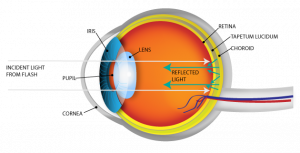 The glow can be attributed to a particular layer of the eye which is known as the tapetum lucidum derived from the Latin word meaning "bright tapestry. It is a layer of tissue found in the eye of many vertebrates.

It contributes to the superior night vision of the animals especially the nocturnal species that hunt their prey at night and some other deep-sea animals. It helps the nocturnal animals to see better in low light by working like a mirror on the retina to reflect the light back through the eyes, giving them a second chance to absorb the light. The colors seem more visible at night because the pupils are dilated wider than during the day, allowing more of the tapetum lucidum to be visible.

Which animals have the special layer?

A large number of animals have the tapetum lucidum, including deer, dogs, cats, cattle, horses, and ferrets. Humans don't, and neither do some other primates. Squirrels, kangaroos, and pigs don't have the tapetum layer either. 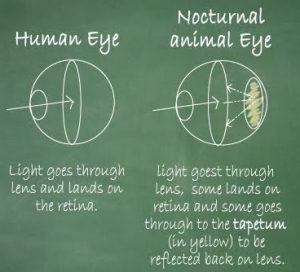 Working of the eye

Before getting to the working or the mechanism of the special reflecting layer let us first understand the working of the eye in brief.

The light enters our eyes and is focused on the sensory membrane of the eyes called retina. The retina acts as a layer collecting images formed by the eye's lens. The retina has millions of photoreceptors which are mainly of two types called the rods and cones. Rods are responsible for the vision in dim light and dark conditions while the cones distinguish between colours and function best in bright light. The images are converted into signals and sent to the brain via the Optic nerve. The brain processes and interprets these and we perceive the vision.

Mechanism of the Eyeshine

The tapetum lucidum is a mirror-like, reflective tissue found behind the retina of an animal's eye. This layer is characterized by neural cell and tissue specialization as an adaptation to a dim light environment.  When light enters the eye, it's supposed to hit a photoreceptor that transmits the information to the brain. But, sometimes the light doesn't hit the photoreceptor. This unabsorbed light is reflected by the Tapetum Lucidum layer. The tapetum layer reflects the light back in the direction from which it was coming thus, giving the eyes second chance to absorb as much light as reflected by the retina. The light that is still unabsorbed is reflected and is perceived as the eye shine or technically retro-reflection.

Well, humans do not have the tapetum lucidum layer, but sometimes we can see red spots in the developed photographs. This is because the light traveling through the pupil illuminates the blood-cell rich retina at the back of our eyes. 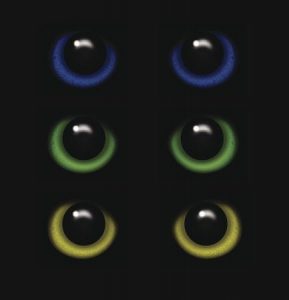 An interesting fact is the eye-shine comes in different colours. Each animal has its own distinct color of eyes, so the shine also varies.

This difference can be blamed on the content of substances like riboflavin and zinc which is never alike in two or more animals, even if they belong to the same species. Age, nourishment, the amount of pigment in the retina, the number of the layer that makes up the tapetum are other factors which affect the colour.  Normally, the most common colours are light green, topaz yellow, but there are also exceptional cases where an animal’s eyes have appeared to be blue or even turquoise in color.