A redhead woman of ample proportions strides to the front stage and the orchestra upsurges. She opens up her Hollywood red lipsticked mouth and there out comes a terrific earthshaking high note. The champagne bottle strategically kept in vicinity, shatters. Wind-chimes crackle. And the chandelier explodes as her powerful voice seeps in through the hall. This is probably the visualization in movies and cartoons. But, is it just reel or actually real? Can an opera singer really vibrate the glass to smithereens? Let’s find out.

When you hear the word ‘music’, a soothing and melodious voice instintively splashes in our minds. But added to that music also causes destruction, breaking down the dainty crystals and creating a havoc. The Physics laws now and again prove that a high pitched soprano voice is able to shatter glass into pieces. The myth surrounding the shattering of glass using a high pitched note has been proven as a fact in one of the episodes of the famous television show, The Mythbusters in the Discovery channel. The hosts of the show Jamie Hyneman and Adam Savage tried out those physics principles and hired a trained vocalist Jaime Vendera to break the crystal beauties. The vocalist accomplished dashing the crystals without the aid of any additional acoustical instruments.

Every object in the universe possess a natural frequency with which it vibrates. Let’s take for instance a wine glass which produces a pleasant ringing sound when clinked. That ringing sound is the vibration of the air particles around the glass at its resonant frequency. This is analogous in the case of an opera singer breaking the delicate crystals. Physics law maintains that a human singer with the right frequency and amplification of her voice, can shatter glass.

Resonance derived from the Latin word ‘resonantia’, meaning ‘echo’, originated from the field of acoustics, precisely observed in musical instruments, like the guitar, whose strings on vibration produces sound. Resonance is the phenomenon or the tendency of any object to oscillate with an amplitude that is greater at some frequency than at other frequencies, under the effect of a vibrating system or a driving external force. The number of waves that pass a fixed place in a second is called frequency. Resonant frequency is when the frequency of the sound matches one of the natural frequncy of vibration of the object. Small periodic external force is capable of producing large amplitude oscillations at resonant frequencies. 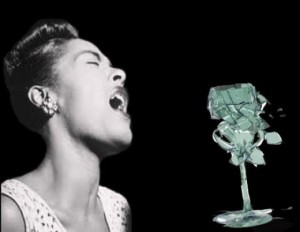 The relevant question here is how does the sound exactly manage to break the glass? The loudness of normal speech is approximately around 50 decibels. When a sound of nearly or greater than 100 decibels is produced, the sound of the singer’s voice will vibrate the air molecules around the glass at its resonant frequency, causing the glass to start vibrating. If the singer is loud enough to match upto precisely the resonant frequency of the glass, glass will vibrate itself to pieces. The key factor involved in the art of vocal destruction is the loudness, frequency and timbre of the sound. The extent to which the air molecules will be displaced is directly related to the loudness of sound. The sound propagates from molecule to molecule until it hits the glass. The nature of the material also plays a significant role. Only the finest leaded crystal is dainty and resonant enough to break at volumes that some people can produce.

Although the stories of powerful impeccable vocalists’ shattering wine goblets and vases abound, one should not try breaking a glass at home screaming in a loud voice. Ambient vocal conditions are necessitated and the nature of the crystal glass also plays a dynamic role. If tried at home without surveillance, one might just end up losing the effectiveness of  larynx.