Do the photochromic lenses fascinate you too? Well, for me they have always been a mysterious topic. The way the glasses acquire the tint when exposed to the sunlight, has always made me wonder, as to why the transition takes place. As a kid, owning them and showing them off to my friends had always been a matter of pride for me. Like me, there must be many who want to understand how the photochromic glasses work. So let us check out the truth behind the photochromic conundrum. 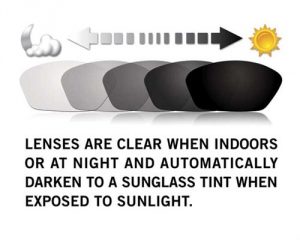 What are photochromic lenses?

The word “photochromic” is derived from two Greek words “Photos” which means Light and “Chroma” which means Colour. Thus, photochromic means the something that changes its colour in response to the Light.

These were originally developed in the 1960s by Donald Stookey who worked as a chemist at Corning Glass Works. Soon after Stookey patented the material, Roger Araujo, another Corning chemist, developed the first photochromic lenses.

The plastic versions were based on based on thin films of organic compounds like oxazines i.e pyridobenzoxazines, naphthopyrans or  indenonaphthopyrans in them.

The reason behind the tint.

These lenses darken or lighten dependent on their exposure to ultraviolet (UV) radiation and return to the clear state gradually when the UV exposure is removed.
These lenses darken only when exposed to the ultraviolet component of the sunlight and not in response to the artificial light whatever be the intensity of artificial light. Like tiny transformers, they can switch between either form depending on the presence or absence of UV light

The transition depends on the principle of equilibrium.

Chemical equilibrium – It is the state in which both reactants and products are present in concentrations that have no further tendency to change with time. Usually, this state results when the forward reaction proceeds at the same rate as the reverse reaction.
The exposure to the UV rays disturbs the equilibrium and hence the tint appears. 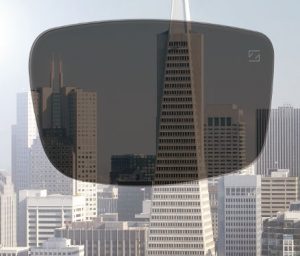 Darkening process – In most of the photochromic lenses, the molecules of silver chloride or another silver halide are embedded. The silver halides are not affected by the visible spectrum, light without the ultraviolet component and artificial lighting.
However, the molecules are very sensitive to the UV component having a wavelength of 315 nm – 400 nm. On exposure to the UV light the Silver Halide (Most commonly chlorine) molecules is oxidized to give Silver and halide molecules.

Most commonly Silver I chloride is used. On exposure the silver gains an electron from chloride to become silver metal, and gets the ability to absorb visible light and appear darker. The silver metal is mainly responsible for the dark tint or shade in the lenses.

In the case of the plastic lenses, the organic photochromic molecules undergo a chemical process. The carbon molecules in the lenses such as pyridobenzoxazines, naphthopyrans, and indenonaphthopyrans—react to UVA light by rearranging their chemical bonds into a new species which causes them to change shape and absorb a significant percentage of the visible light and hence darken, when exposed to ultraviolet rays. These processes are reversible.

The organic films of plastic photochromic lenses are more susceptible to degradation than the silver halides used in glass, even when the plastic lenses are lighter and thinner than their glass counterparts.

Clearing process – The darkening process is almost instantaneous. However, the lenses become clear in three to five minutes. The clearing reaction is slower because they cannot rely on the driving energy of UV light. The changes in the molecules whether Silver halides or organic compounds are reversible and the molecules revert to their original form (equilibrium state) and the transparent state when the exposure is removed.

Factors that affect the transition 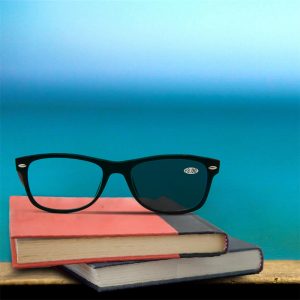 These colour changing lenses provide the correct amount of protection for the varying light conditions and absorb 100% UV radiation that can otherwise damage the eyes.
However, they do not adjust immediately and take a few minutes to change from light to dark or vice versa. They don’t always work effectively in cars because windscreens naturally screen out most of the ultraviolet light and thus they do not acquire the tint.

Now that you know the reason behind the magical Photochromic glasses, you can spread the knowledge amongst your friends who are unaware of it. So, stay curious and keep learning.