You all familiar with the delicious taste of honey and it is the only food that does not spoil even after 5000 years.

“The Oldest honey ever found was unearthed in Georgia, and dates back over 5,000 years.”

Let’s discuss the science behind it

Honey is the viscous liquid which is known as sugar. However, it is not granulated, white sugar.

Sugar is hygroscopic in nature, it means, they contain a very little amount of water in their natural state but can readily suck in moisture if left unsealed.

“Amina Harris, executive director of the Honey and Pollination Center at the Robert Mondavi Institute at the University of California, Davis explains, “Honey in its natural form is very low moisture. Very few bacteria or microorganisms can survive in an environment like that, they just die.”

It is one of the reasons which explain, why honey does not spoil.

Another aspect of why honey doesn’t spoil

Role of Bees – How Do Bees Make Honey 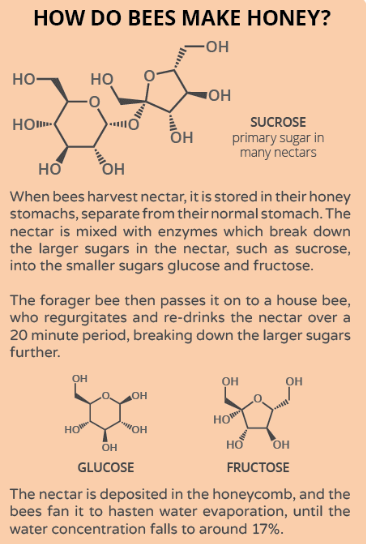 Bees play the main role in making honey. There is a special alchemy that goes into honey. Nectar, the first material collected by bees to make honey, is naturally very high in water–anywhere from 60-80 per cent.

But through the process of making honey, the bees play a large part in removing much of this moisture by flapping their wings to dry out the nectar. Second, the way bees get nectar into honeycombs is by vomiting it there.

Bees have an enzyme in their stomachs called glucose oxidase (PDF). When the bees regurgitate the nectar from their mouths into the combs to make honey, this enzyme mixes with the nectar, breaking it down into two by-products: gluconic acid and hydrogen peroxide. “Hydrogen Peroxide is the next thing that goes into work against all these other bad things that could possibly grow.”

Is Only Honey a long-lasting Food?

No, honey isn’t the only hygroscopic food source out there. Molasses, for example, which comes from the by-product of cane sugar, is extremely hygroscopic, and is acidic, though less so than honey (molasses has a pH of around 5.5).

There are a few other examples of foods that keep–indefinitely–in their raw state: salt, sugar, dried rice which can be eaten but only after some modification.

How to Store Honey for a long time

Honey is hygroscopic means that it has little water in its natural state but can easily suck in water if it’s exposed to it. If it does that, it could spoil. So the final key to honey remaining unspoiled is making sure it’s well sealed and stored in a dry place.

Published in Chemistry and General