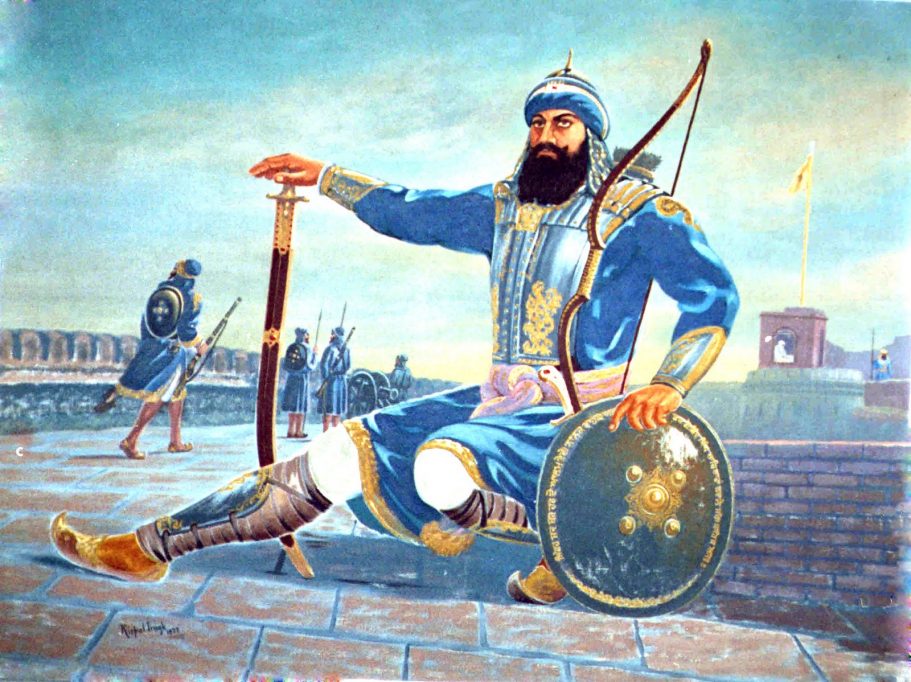 Baba Banda Singh Bahadur whose original name was Lachhman Daas was born in 1670 at village Rajori in the Jammu state of India. His father’s name was Ram Dev. He trained Banda Singh in wrestling, horseback riding and hunting.

At age 15 he left home to become an ascetic, and was given the name ‘’Madho Das’’. He established a monastery at Nānded, on the bank of the river Godāvarī, where in September 1708 he was visited by, and became a disciple of, Guru Gobind Singh, who gave him the new name of Banda Singh Bahadur.

Guru Gobind Singh ji visited his monastery in 1708. He tried to practise his tricks of magic on Guruji but failed and became his follower.

He bowed before Guruji and said “I am your ‘Banda’ (slave).” Guruji blessed him and inducted him into the Sikh faith by baptizing him. He came to be named as Banda Singh. Guruji acquainted him with the history of the Sikhs and principles of the faith. On learning about the cruelties committed by the Mughals, he was filled with rage and requested Guruji to permit him to go to Punjab and punish the cruel rulers. His request was granted.

Guru Sahib gave him a drum, a Khalsa banner, and five arrows from his personal quiver and appointed him as the leader and commander of the Khalsa forces. Five Sikhs were deputed to accompany him. He was also given a few letters addressed to the leading Sikhs in Punjab. All the Sikhs were called upon to help Baba Banda Singh who was also advised to remain pure in conduct and help the needy.

His first major action was the sack of the Mughal provincial capital, Samana, in November 1709. After establishing his authority in Punjab, Banda Singh Bahadur abolished the zamindari system, and granted property rights to the tillers of the land.

When Baba Banda Singh entered Punjab, the Sikhs flocked to him. Village after village fell to the advancing Khalsa army led by him. He conquered Samana in 1709, punished the oppressors, and attacked other centers of oppression like Kanjpur, Kapuri and Sadhaura and went on moving forward punishing the tyrants.

There stands a Gurdwara named Gurdwara Shahidi Asthaan Baba Banda Singh Bahadur in his memory in Mehrauli, near Qutab Minar, in Delhi.

On 300th anniversary of the martyrdom of Baba Singh Bahadur, the Delhi government has decided to name the Barapullah flyover as Baba Banda Singh Bahadur Setu.