Home » Bihar: No salaries to teachers, but education department gifts ovens worth Rs 30 lakh to MLAs

Bihar: No salaries to teachers, but education department gifts ovens worth Rs 30 lakh to MLAs

It’s almost seems to be a  of the erstwhile jungle raj in Bihar yet again under the proxy regime of fodder convicts Laloo Yadav who happened to manoeuvre the electoral battle last year by employing caste and religion tactics. Chief Minister Nitish kumar who once promised to give efficient governance, has also belied the aspiration of the voters. 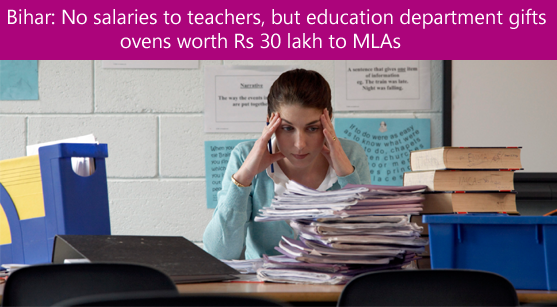 It’s a known fact that education in Bihar is in shambles, with abysmally low literacy rates; all this state can continue to produce is the largest population of migrant labourers. But the Bihar government departments are playing an  Santa Claus, to the Assembly’s 243 legislators during  Budget Session, showering gifts such as microwave ovens, trolley bags and smart phones on them. At a time when more than 3.5 lakh teachers are awaiting their salaries since November last year, the education department gifted microwave ovens to all the MLAs and 75 MLCs on Friday.The cost of each microwave oven was Rs.11,125/- making the combined cost Rs.35.37 lakh.

Justifying the largesse, state education minister and Bihar Pradesh Congress Committee president Ashok Choudhary had said that Microwaves are given so that MLAs can heat the food served in the  meal scheme in their areas and test it for quality. When reminded about  of teachers’ salaries, he replied, “The microwaves cost  lakh in all. Relating it with other issues is not right.”

The state’s road construction department gifted smartphones, while the urban development ministry handed out trolley bags. It is an  practice. MLAs were also given gifts after the budget of the departments were approved in the Assembly. Earlier, a folder was given to keep papers. According to an  giving costly gifts is a recent trend.

The son of ex CM and fodder convict who also happens to be the Deputy Chief Minister of Bihar, Mr. Tejaswi Yadav has defended the government’s freebies. According to him, Bihar is a poor state and elected people here are not millionaires, so it’s not wrong to get such gifts.

In support of this, BJP leader and former leader of the state Opposition Nand Kishore Yadav quoted that this is an old practice and he had even received a gold plated watch in 1995 when Deo Narayan Yadav was the Speaker of Vidhan Sabha. The only exception were CPI(ML) legislators who termed this practice as a sheer waste of public money and amounting to bribing elected representatives.

Playing a very loyal role of Opposition in Bihar assembly, BJP had questioned the state’s education department gifting microwave ovens to all 243 legislators at a time when thousands of teachers were awaiting payment of salaries since months. Previously, other departments have gifted costly items to legislators as a goodwill gesture. Interestingly, BJP and its allied legislators also accepted these gifts. The former deputy CM Sushil Modi had returned all seven.

gift items, including the microwave oven that he received during the  Budget session setting good example for the rest.Following the backlash over the Bihar government's tradition of handing out gifts to legislators, the Nitish government may now scrap the practice. However, thousands of teachers of schools continue to agitate for not being paid their salaries for months. If this is not a state of dichotomy; what is?