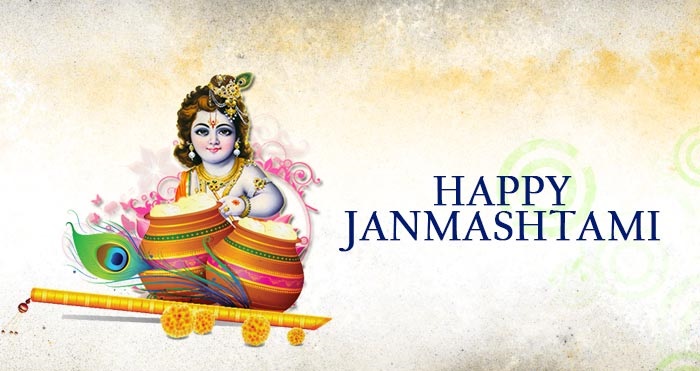 Krishna Janmashtami, the birthday of Lord Krishna also known as Krishnashtami, Saatam Aatham, Gokulashtami, Ashtami Rohini, Srikrishna Jayanti, Sree Jayanti or sometimes simply as Janmashtami is celebrated on the Ashtami of Krishna Paksh or the 8th day of the  Krishna Paksha (dark fortnight) in the month of Bhadrapad (August-September).

Janmaastami is portmanteau of two words: Janma (birth) and Ashtami (eight). According to Hindu Mythology, about 5000 years ago, the eight reincarnation of Lord Vishnu ‘The KRISHNA’ was born in Mathura and was the eighth son born to the princess Devaki and her husband Vasudeva in a prison in the custody of kansa.

The sole objective of Sri Krishna’s birth was to free the earth from the evilness of demons and ‘KANSA’ was the prominent one.

His birthday is celebrated every year all over India with an unmatched zeal and grandeur. People observe fast, decorate their homes and prepare delicacies to offer to the lord, following the other rituals of the day. The actual celebration of Janmashtami takes place during the midnight as Sri Krishna is believed to be born on a dark, stormy and windy night to end the rule and violence of his uncle, Kansa.

MATHURA AND VRINDAVAN; are the special attraction of this festival, as the former being the birth place of LORD KRISHNA while the latter being the place he spent his childhood years. Both places are wonderfully decorated and illuminated.

He played an important role in Mahabharata and propagated the theory of bhakti and good karma which are narrated deeply in the Bhagwat Geeta.

Krishna came to be revered as one of the most important Hindu gods. As per Bhagavad Gita, he is the supreme lord in the universe.

“I am the father of this universe, the mother, the support and the grandsire. I am the object of knowledge, the purifier and the syllable om. I am also the Rig, the Sama and the Yajur Vedas.” (Lord Krishna, Bhagavad-Gita 9.17)

“I am the Supreme Lord of all creation and I create and destroy this universe, being it’s ultimate cause. I am the Absolute Truth and one who worships Me with unfailing devotional service comes to Me.” (Lord Krishna, Uddhava Gita 12.45)