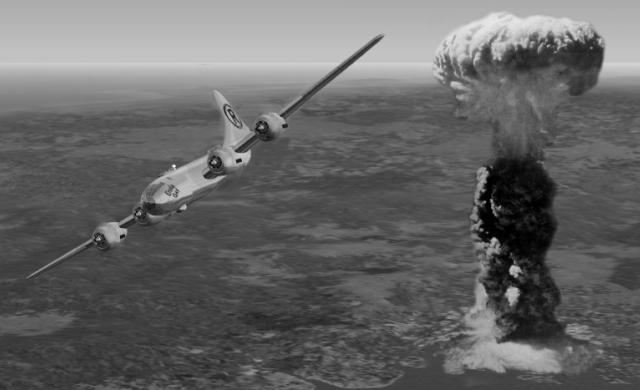 On 9th August in 1945, a second atom bomb was dropped on Japan by the United States, at Nagasaki, a city situated on the western side of the Japanese island of Kyushu, resulting finally in Japan’s unconditional surrender.

Nagasaki is the second and, to date, last city in the world to experience a nuclear attack.

The devastation wrought at Hiroshima was not sufficient to convince the Japanese War Council to accept the Potsdam Conference’s demand for unconditional surrender.

The United States had already planned to drop their second atom bomb, nicknamed "Fat Man", on August 11 in the event of such recalcitrance, but bad weather expected for that day pushed the date up to August 9th.

So at 1:56 a.m., a specially adapted B-29 bomber, called "Bock’s Car", after its usual commander, Frederick Bock, took off from Tinian Island under the command of Maj. Charles W. Sweeney.

Nagasaki was a shipbuilding center, the very industry intended for destruction.

The bomb was dropped at 11:02 a.m., 1,650 feet above the city. The explosion unleashed the equivalent force of 22,000 tons of TNT. The hills that surrounded the city did a better job of containing the destructive force, but the number killed is estimated at anywhere between 60,000 and 80,000, as exact figures are impossible, the blast having obliterated bodies and disintegrated records.