Home » Aside » The Orchestrated Chasm of Gender

The Orchestrated Chasm of Gender

The ratio of females in comparison to males is generally low all across India. In all walks of life, it is found that the societal equation is tilted against them, demonstrating a patriarchal mind-set of our society. The consideration of this gender, a traditional taboo had led to the grotesque predicament of sex-selective abortion. The demand of dowry from the bride’s family by the groom was another reason why baby girls were detested, since it was considered to be a harbinger of financial peril for the family. As per as UNICEF report, around 5,000 women are killed in dowry-related incidents each year in India.

Sex ratio, described as the number of females per 1000 males, is a valuable source for finding the population of women. According to the Census of 2011, the population ratio in India 2011 is 940 females per 1000 of males. There has been gradual increase in the sex ratio of the country, while two states namely Kerala and Puducherry have done tremendously well in enhancing the female population. The Union Territory of Daman and Diu and the state of Haryana have the lowest density of female population. According to the census of 2011, the sex ratio of Kerala and Puducherry are 1084 and 1037 respectively.

the centre to initiate the party’s pet project ‘Beti Bachao Beti Padhao’ roughly translating into ‘Save the girl child, educate the girl child’, a joint venture of Ministry of Women and Child Development, Ministry of Health and Family Welfare and Ministry of Human Resource Development from this very state. This project is being executed through a national campaign and focussed multi-sectoral action in 100 selected districts low in child sex ratio.

The society, tradition and religion have factored in the exacerbation of the gender chasm. The conservative social and religious groups have thwarted even the minuscule effort to ameliorate the cachet of this fairer sex, not to forget the political angle in this. These orthodox groups are known to run parallel judicial apparatus largely, sponsored by na 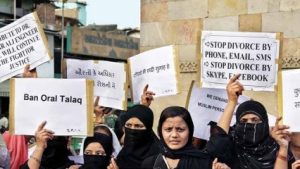 rrow- minded political coteries. Another dichotomous scenario displayed are by the feminist motley, endorsed by the west who remains mum on gender issue, unless it suits their vested interest. The non-implementation of Uniform Civil Code is an apt paradigm, which has been put in quandary by the political parties to propitiate the orthodoxy caucus. As a brush up of memory, the nullification of Shah Bano verdict by the ruling political dispensations of the time, Congress had nipped in the bud the tiny stride to end the gender chasm.

The delusion has been breached by the voyage of time, the manifestation of this is exhibited in the appointment of the first female MEA of the country, deployment of women in the frontline defence of the country, commission of female fighter pilot.