Home » Aside » The Political Snare of Caste

The Political Snare of Caste Caste has always been an intrinsic feature of the Indian Political conundrum, almost synonymous to secularism for the political factions in existence. This phenomenon has borne a plethora of political parties with different nomenclatures, who are habituated to view any issue through the prism of caste. It has been professed since the colonial periods that caste is ingrained in Hinduism to create chasm among the populace of the Country.

on caste paradigm and have entrapped them using it as a snare. Post Mandal Commision, the issue of caste has beco me the hot button issue in the Indian Political arena and has watershed all the pertinent issue encountered by the voters. This has been used over and over again as a springboard by caste oriented parties to plunge onto the political seat. This is best exemplified in the assembly election of Bihar, where the caste resurrected Laloo Yadav, a political leader borne out of Mandal, who had faded into oblivion. Not to forget that the same issue of caste has also vanquished the BSP led by Mayawati in the General Election of 2014.

If one goes by the statistics of various political regime under which honest efforts were made for the annihilation of it, we would ironically find that the so-called champion of caste has only exacerbated it to elongate their vested political interest. The current political party, BJP, in power traces its roots to Jana Sangh, a political party founded by Brahmins as an alternate party to Indian National Congress, has been disgraced as party of Brahmins and Traders although it has largest leaders hailing form the lower echelons of society. The sheer proportion of the population who are considered to be lower caste has made the electoral politics to revolve around it. The regional political parties fundamentally sustain themselves in the electoral field on the issue of caste. 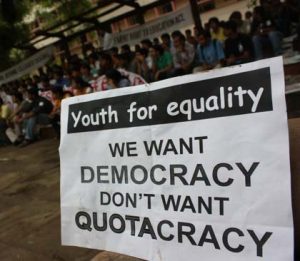 The issue of caste has intermittently been employed by the crooked elements to fragment the national unity and to tar the faith of the majority as Brahminical in entirety. The policy of reservation, implemented by then PM VP Singh has only engulfed the societal divide, making the caste major determinant followed by religion for elections in India. This issue, has been flipped into a politically cardinal affair from merely a redundant one. Parties have etched caste into minds of the voter to keep them politically aloof thereby making them to genuflect before them.

Using of caste and its perpetuation negates the very ethos of democracy practised in India.