The capital city of India, the world’s largest democracy, is gasping for breath under a shroud of smog, since Diwali. Particulate matter finer than 2.5 micrometers are hovering in the air – almost 15 times the safety limit. With the government announcing some emergency reactive measures and shutting down schools and colleges, Delhi has seen the pollution levels touching new heights with severe air quality. Citizens are blaming the government and the political parties are trolling each other endlessly.

It is not just Delhi though, air pollution is a common problem around the world. According to a study conducted by the World Health Organization, the number of deaths occurring because of air pollution is 6.5 million a year. The fact is that the fourth largest threat to human health, apart from high blood pressure, dietary risks and smoking, is air pollution. Premature deaths caused due to air pollution have declined in European countries and United States, while the rate has increased in Asian and African countries. 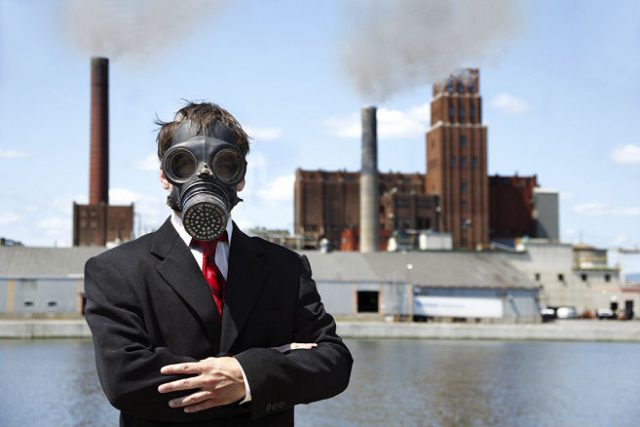 Air toxics are existent as gaseous, aerosols or particulate pollutants that are present in the air in low concentration with toxicity, which is hazardous to human, plant or animal life. The main sources of these pollutants include motor vehicle emissions, solid fuel combustion, industrial emission and materials such as paints and adhesives in new buildings. The environmental Protection Agency (EPA) has identified six types of common air pollutants – ozone, particulate matter, carbon monoxide, nitrogen oxides and lead.

These pollutants pose the greatest threat to the human health. The pollutants and its effect on health are explained below briefly:

Carbon monoxide: CO is colorless and odorless and is the chief pollutant with about 62 percent produced from vehicles. The other sources of this pollutant include forest fires and burning of industrial waste. Even in small concentrations, CO blocks oxygen from being delivered to our body. Moreover, when produced at higher levels it can even cause death.

Sulfur dioxide: A colorless and highly reactive gas, it is produced from combustion at industrial 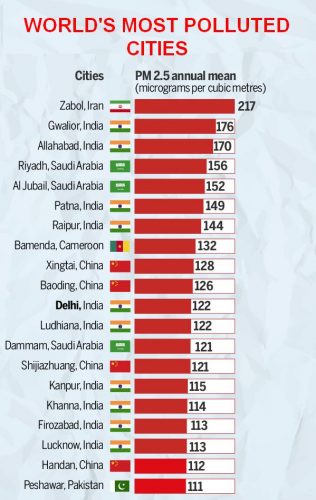 power plants – generating electricity from coal. Sulfur present in coal reacts with atmospheric oxygen in the air forms the poisonous sulfur dioxide. Sulfur dioxide causes respiratory illness like asthma and bronchitis when breathed in. Sulfur dioxide in the air further reacts to form sulfur acid, which pours into Earth as acid rain.

Nitrogen oxide: It is a highly reactive gas and originates from vehicle and industrial combustion emission. The smog that we see over the cities is because of the presence of this gas in the atmosphere. Nitrogen oxides also cause respiratory illness.

Ozone: Ozone is commonly known as the protective layer, which shields us from the harmful ultraviolet radiations. However, when ozone is lower in the atmosphere it becomes a secondary pollutant by reacting with the combination of sunlight, heat, nitrogen oxides and volatile carbon containing compounds. This is dangerous to our health because it causes respiratory illness and damages ecosystems.

Particulate matter: These are the particles, which remain suspended in the air and 60 percent of

the particulate matter pollution is wind-blown dust. Sources of these particulate matters are naturally occurring volcanoes, dust storms, forest fires and human activities that include burning of fossil fuels in vehicles, power plants, and various industrial processes. Airborne particulates have been designated as Group 1 carcinogens – deadliest form of air pollution. These particulates penetrate deep into the lungs and blood streams causing permanent DNA mutations, heart attacks, and premature deaths. The PM2.5 floating in the Delhi air at present is lethal and causes lung cancer.

In addition, a firecracker, which contains a combination of elements and heavy metals like sulfur, nitrogen, potassium, lead, mercury and barium, becomes oxides when it reacts with oxygen present in the atmosphere. These pollutants cause dry eyes, breathing ailments, sore throat, lung diseases etc. Exposure to lead causes death of all kinds of life forms and World Health Organization (WHO) names it as one of the most dangerous chemicals. The poisonous gases apparently settles in the soil and enters the crops that we consume thus, posing a threat to our lives.

The pollutants emitted can scar the present and coming generations for life. The upstream factors responsible for air pollution need to be addressed by the government on a serious note. Moreover, as the citizens of a nation preventive measure needed to combat this major threat needs to be taken.