If one goes by mythology, the festival of Deepawali is a mark of celebration of the home coming of Lord Ram, the son of King Dashratha to Ayodhya from his exile of 14 years. On the occasion, people had illuminated the entire kingdom of Ayodhya with earthen lamps for their beloved prince. Since then, this ritual has been celebrated by generations after generations as a festival of sweets and lights.

Deepawali, is celebrated by every household irrespective of religious affiliations, making this a truly Indian Festival. The imprint of this is even said to be visible from space, when lights adorn every house in the darkest of nights. The whiff of the festivity seeps in days prior to the arrival of the festival. Every household gets into a frenzy of cleaning, wringing out the old and bringing in the new. The light of joy enlightens everyone and no one is spared from it, whether elders of the society or for children, for whom it’s a great occasion to burst crackers.

The festival is also co 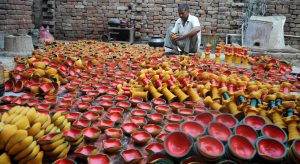 loured in the nationalistic hue, apart from the tradition milieu. Though the festival comes with its dark side too, in the form of spiking the air pollution levels, it is nevertheless an event that no one wants to give a miss, if they can help it. Propaganda related to reducing pollution has been a part of every year’s Deepawali celebrations since the last decade. With the current government’s focus on locally made products, the opting of earthen lamps over Chinese built LED lights has been a perfect showcase of blended tradition with environment for the current year’s celebratio ns.

This Deepawali, unlike in the pas 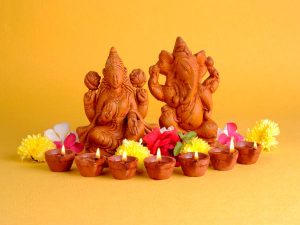 t is also infused with patriotic zeal, one of the indicators being the insistence of a large mass of the public and retailers prophesizing diminished sales of the products made in China. People are being encouraged to using traditional mean of celebrations. The camps are divided and battle lines drawn do not fade, even with the pomp and joy the festival brings. The realists vs. loyalists debate is always a long one. Whatever said and done, one thing is for sure, that one always gets wrapped into the auspiciousness of the festival and put on a few pounds savouring the sweetness around or get blown away by those extra decibels on the night of Deepawali.