Home » Aside » The Noteworthy of North East India

The Noteworthy of North East India

North East India is composed of Seven Hill States, revered as seven sisters, the conterminous states being Assam, Arunachal Pradesh, Meghalaya, Manipur, Mizoram, Nagaland and Tripura. These states have international boundaries and act as the pivot to India’s Look East Policy. Of it, the state of Arunachal Pradesh bears the scene of border tussle with India’s most contentious neighbour, China. The region has witnessed the Chinese incursion in 1962. These regions have remained the most protected and unexplored due to its susceptivity and some of the states have operational Inner Line Permit. Indian citizens desirous of visiting Arunachal Pradesh, Nagaland and Mizoram are required to obtain Inner Line Permit, which is issued under the Bengal Eastern Frontier Regulation, 1873.

The North Eastern States of India stay rather aloof from the mainland due to political, social, ethnic and economic, and security reasons. The entire hill states of North Easter elects only 25 representatives to Lok Sabha, constitutes about 8% of India’s geographical area and has 3.1% (2011 census) of the total Indian population. The religious scenario of these parts of India is unique in itself, as it was one the few places in India, serving fertile ground for proselytization to early Christian missionaries, a testament to it are the states of Nagaland, Meghalaya, Mizoram 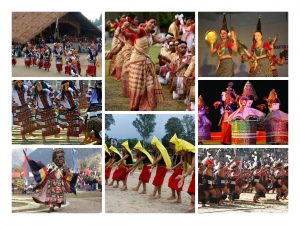 having a Christian majority population. The lesser extent of Islamic population here is because it was only part of India to remain out of Mughal Invasion. The prevalence of Buddhist population to attributed to the existence of Tawang Monastery, the largest monastery in India.

The inhabitant of these regions are various ethnic and tribal groups, each having distinct linguistic characteristics and attire, making them culturally assorted regions of India. The geneses of these ethnic groups are traced to Tibeto-Burmese, proto Austrioloids and some to Indo-Mongoloids, sprinkled over the entire North Eastern States. Arunachal Pradesh alone houses around 25 types of tribes while Nagaland to more than 16 major tribes, namely Garo, Khasi, Jaintia, Adi, Nyishi, Angami, Bhutia, Kuki, Rengma, Bodo and Deori. The noteworthy hallmark of these regions has led the formation of The Ministry of Development

of North Eastern Region (MDONER) tasked with planning, execution and monitoring of development schemes and projects.

The region is turning out to be the finest hot spot for Organic Farming India where the State of Sikkim becoming a fully organic state of the Country.